Why are electric motorcycles so expensive? We’re going to address this once and for all because it’s the single most frequent question/comment we get…

“No one will buy it at that price”

It’s starting to sound like a broken record so we’re going to go into a little detail of why electric motorcycles are so expensive right now, and what you can do about it.

There are a few main reasons why electric motorcycles are more expensive compared to internal combustion engines (ICE) – the price of batteries, the cost of production, new product development, start up costs, new technology research and more. One thing to understand off the bat is that you’re comparing new electric motorcycle technology to every other motorcycle that’s come before it. Internal combustion engine motorcycles have been around over a hundred years, and that means over a century of development and refinement. They’ve become lighter, more efficient, mass-produced in multiple markets – some of which have very cheap labour but also questionable production quality (depending on the manufacturer).

Petrol motors can produce more power with less fuel, parts and maintenance than the motorcycles that were produced 50 years ago. Slowly but surely, the petrol motorcycles we see on the road today have improved incrementally over decades. To what end though? At what stage would motorcycle development take that inevitable evolutionary leap forward? Well, here we are, electric motorcycles.

Electric motorcycles started popping up in the late 1970’s but it’s only in the last 15 years that we have really seen them take off commercially. That’s due to rising petrol prices, fear of climate change, health concerns from emissions, a desire to become less dependent on oil producing countries and many other factors. In the last 5 years specifically – we’ve started to see battery density that can allow electric vehicles to start to match petrol ones for range.

We’re entering a completely new era of technology so naturally the costs of production will be higher than a process manufacturers have been working for over a century on to refine. This is a cost that is going to reduce as the knowledge of electric motorcycle production dissipates into other markets and the technology improves year after year. We could have gone through this evolution 30 years ago – but there wasn’t the political desire, public opinion and investment into electric vehicle technology to enable it.

For many of the premium electric motorcycles we sell at AEMC – the battery pack (the battery cells, casing, circuits, BMS, cooling system, inverter, AC charger and controller depending on which model we’re talking about) make up a third or half of the production cost of the bikes. And while the cost of batteries continues to fall – it’s still a hell of a lot more expensive to produce a high quality, long lasting motorcycle battery pack than a petrol engine. On paper – if you’re just looking at the battery cell costs, once those drop to $100 per kWh we should be seeing battery power costs about the same as petrol to produce. But that’s an oversimplified assumption. Petrol prices have been rising rapidly and show no signs of slowing. And battery packs are made up of a lot more than just the battery cells. Volvo’s CEO Jim Rowan thinks petrol and electric cars will reach the same production costs in 2025 thanks to rapid development in EV technology. The motorcycle industry is definitely a few years behind the car industry when it comes to EVs – so, best case scenario it’s not going to be in this decade that electric motorcycles cost the same or less to produce than petrol ones.

Something to keep in mind however, is that with an electric motorcycle – you are paying a lot more of your lifetime fuel and maintenance costs upfront. If you can access free or low cost charging/electricity (such as having solar or other renewable energy on your property – which over a third of houses in QLD have) you won’t pay anything to fuel your electric motorcycle – the average solar system in Australia provides more than enough power to supply a house and charge an electric motorcycle a few times per week without having to pay for grid supplied electricity. With a petrol motorcycle – the average Australian rider pays the petrol station $25 a month for fuel (riding 2,600kms per year at $2.20 per litre). That’s a few grand over the lifetime of the bike – or a lot more if you ride a lot. Maintenance costs are also generally much lower for electric motorcycles so there’s another couple of grand you could be saving over the lifetime of the bike.

If you think about some of the biggest names in electric motorcycles, what comes to mind? Energica? Zero? Stark Future? Super Soco? One thing you’ll notice about the companies that are top of the game in the electric motorcycle space is that they’re all relatively new companies who have had to invest millions into developing and testing new technology. That comes with a huge amount of risk – and people that put the money up for that investment expect to see a good return if it works. Naturally you would assume Honda, Ducati, Kawasaki or Yamaha would be leading the way in electric motorcycles, but they’ve been pretty slow to invest. Sure, Harley Davidson and KTM already have models out there, but we are only expecting to see something from the world leaders in motorcycles next year. Companies like Honda or Ducati could make 10,000 units of an electric motorcycle as a trial and it would be considered pretty low risk on their part. But it has an impact on their core business – petrol motorcycles. So they have been moving slowly – but are getting a fire lit up their asses by governments. In Europe many governments are promising to ban the sale of new petrol vehicles by 2035, so at this point, it’s adapt or die.

It takes a lot of money to start a business, let alone a business with the ambition of becoming a world leader in electric vehicles. Being a startup in the electric vehicle space comes with very high running costs – to attract and retain amazing talent and develop prototypes. Then you have to manage the investment risk on a massive scale because so many of these startups fail. 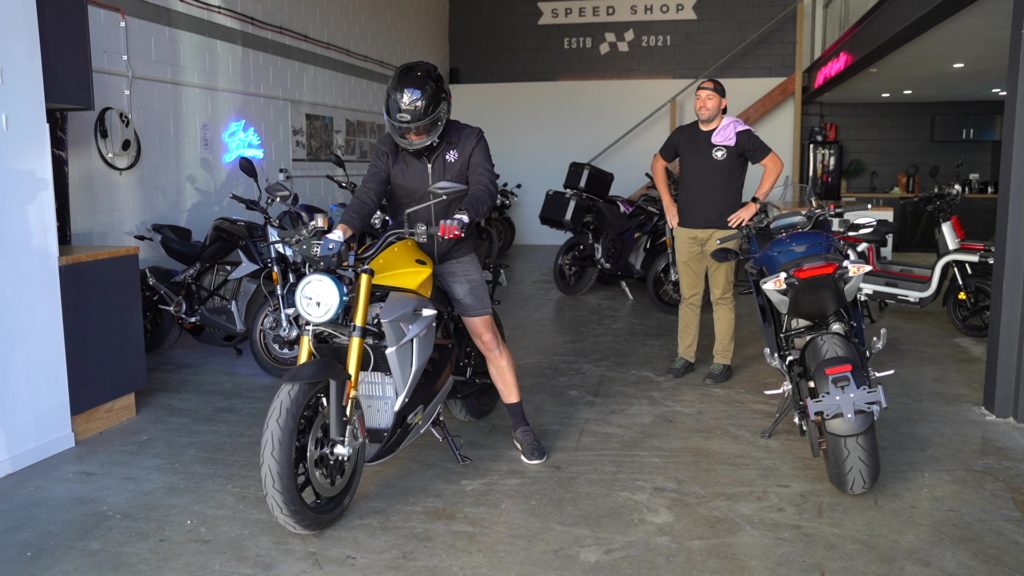 These running costs and risks that come with it have to be passed on to the consumer eventually – that’s the price of new technology. We see it in every industry when a new technology comes along – flat screen TVs used to start from a few thousand dollars when they were first released. Now you can pick up a 55 inch one on Kogan for $400.

Companies like Tesla, Energica, Zero, are putting massive amounts of money into research and development of their vehicles. When Energica became the sole supplier of motorcycles to the Moto E racing series – they would have lost millions to test, develop and maintain those motorcycles. That investment has led to the most advanced battery packs in any production electric motorcycle which mean better performance and longevity for consumers. Something that early adopters will have to pay a higher share of to access the technology and help the development and affordability of the technology in years to come.

The handful of start-ups that are leading the electric motorcycle race are producing some of the most technologically advanced vehicles we’ve ever seen. There’s never been technology like this before and this takes thousands of hours of scientific research and engineering excellence. Something we have way more experience with in Australia than we ever wanted to! Getting vehicles approved for road use in Australia is painful, slow and expensive. Electric motorcycles are relatively unknown for the Australian government – which makes them even more difficult to get approved for import and road use here. Those costs need to be covered by the consumer. Even transporting electric motorcycles is more expensive because the batteries are considered “Dangerous Goods”. This will become less of an issue once shipping companies become more familiar with the vehicles but for now this all makes them more expensive to get here and get road approved.

Costs are coming down The cost vs the REAL cost

The initial purchase price of an electric motorcycle is higher than most petrol equivalents for sure – but you end up paying far less in stamp duty, fuel, servicing and maintenance over the lifetime of the bike. It’s probably still not even over the whole lifetime of a motorcycle yet – but it’s getting closer each year. In a case study we recently weighed up the yearly costs of owning a top of the line Ducati Panigale V4 with its electric counterpart, an Energica Eva Ribelle. You can read the full breakdown here, but owning an Energica Eva Ribelle costs $2,500 less per year to own and maintain. That was just one specific example though. If you are on the fence of buying an electric motorbike then we would recommend looking into how much you would be paying for an ICE motorbike over the first 5 years of ownership. That will give you a better comparison of the real price of that bike versus an electric motorcycle.

So, why are electric motorcycles so expensive? By now you should have a solid understanding. And we will be sharing this article A LOT to the broken records. If costs are the biggest concern for you with an electric motorcycle, maybe you just have to be patient until a model is introduced that either fits your budget, or you find a finance solution that you’re happy with.

If you’re ready to get yourself on an electric motorcycle then come and chat to the team at AEMC. We were working to increase the supply of electric motorcycles in Australia – which will help make the technology more affordable for Australians in the future.