This is the ultimate showdown of Electric vs Petrol motorcycle costs

I bet you’ve asked yourself this question, which is more expensive – Electric or Petrol motorcycles? We’re not talking purchase price here, we’re talking every cost involved in owning and maintaining a motorbike. There seems to be a lot of grey area in people’s knowledge around electric vs petrol motorcycle costs, so we’re here to clear it up.

One thing we come across a lot from bike enthusiasts whenever we get excited about a new electric motorcycle is “too expensive” “cost too high” or “HOW much!?”, look – RRP is higher on electric bikes, they’re a new technology, a premium product and high performance vehicle batteries are expensive. But that’s kind of where the hit to your pocket stops. Today we’re putting two very different electric motorcycles up against their petrol counterparts, in the ultimate “which one is more expensive” showdown. We will be comparing the models based on the recommended retail price (RRP), cost of registration in Australia, Stamp Duty, cost to service, cost of power (petrol vs electricity), resale value and finally, the average cost to own per year.

If you’re a hard motorbike lover we’re sure you might have some idea of where your favorite bikes sit in these criteria.

First in the petrol corner we have the Ducati Panigale V4 S, a ferociously styled superbike built from almost a hundred years of championships and innovation. The Panigale’s V4 S 1103 cc engine packs a hard 210hp giving you insane speeds and with a range around 210km. It’s a gold standard motorbike that’s hard to beat.

Going up against the Panigale, a competitor from its home country, from the Modena Valley, Italy, it’s the Energica Eva Ribelle. Energica is top of the line when we’re talking electric motorbikes, they surpass anything currently available on the market and they continue to expand what electric bikes are capable of. The Ribelle’s class leading 126kW engine combined with 215 Nm of torque will take you from 0-100 in 2.8 seconds (a few tenths of a second quicker than the Ducati). The range on the Eva Ribelle tracks in at about 250km. A pretty smart match for the Panigale.

Next is a crowd favourite, the Yamaha XSR900. The 2022 release was hailed as the rebirth of a legend. We saw a complete reinvention of the XSR900 that definitely raised a few eyebrows. It’s retro 80’s racer-styling combined with the 890cc engine, sending you with 115hp with a range of around 220 km to a tank, come on, what’s not love.

Stepping up against the XSR900 is the Zero SR/F. Zero is without a doubt one of the biggest names in electric motorcycles. The SR/F is the world’s first fully ‘smart’ motorcycle and Ironman level tech aside, this bike has some power. Its Z-Force engine peaks at 82kW giving you a neck cracking 190 Nm torque and the SR/F will take you about 190km on a full charge. 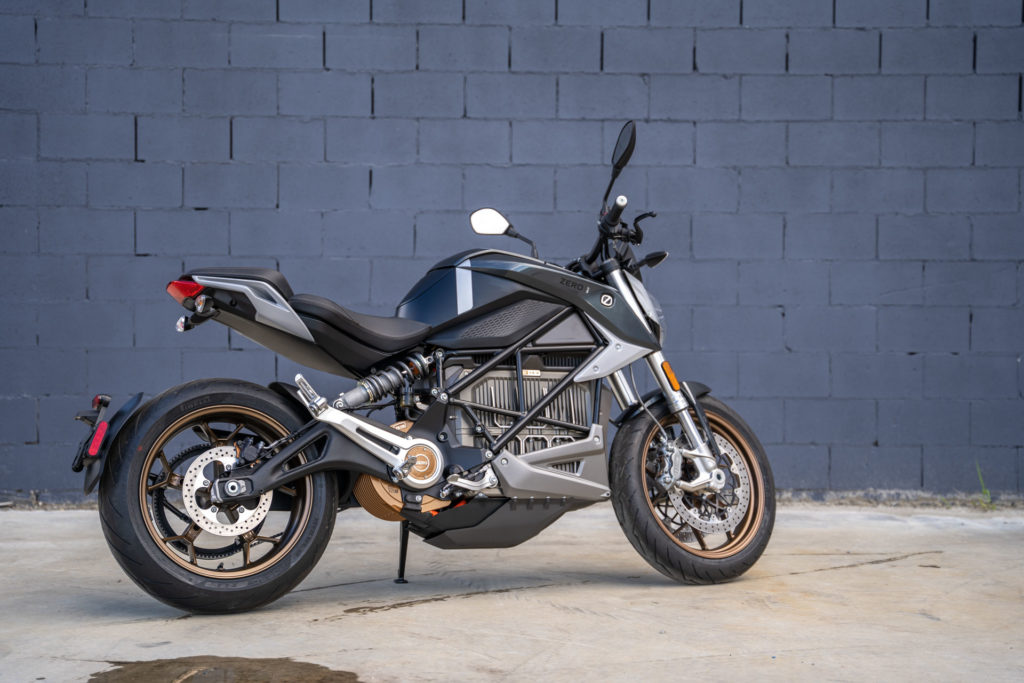 Here’s our comparison of electric vs petrol motorcycle costs in Queensland:

*Registration is calculated in QLD rates for one year

*Cost to power – based on doing 5,000 kms per year. For petrol bikes the price to fill a tank, for an electric bike the cost to charge a battery based on the average cost per kWh in QLD.

*Resale value – estimated based on the same model of bike 5 years old. As we don’t have many used electric motorcycles in Australia – we’ve based our resale value on what we’ve seen in our shop in the UK over the last 3 or 4 years. Typically electric motorcycles hold their value better because of the shortage in supply vs petrol bikes and the longevity that comes from a much simpler drive train/less maintenance required. For some of these points it’s kind of tricky to compare costs, of course we know electricity is far cheaper than fuel, especially these days with unleaded fuel costing upwards of $2.30 in many places. And electricity can also vary in price – but at our shop in QLD we pay $0.20 per kW so we’ve used that as our example rate.

Electric motorcycles don’t have the need to replace clogged filters, oil, spark plugs, clutches, gearboxes etc. It scales back all the things that can go wrong into a single moving part. This means there’s less that can go wrong, and it costs a lot less to maintain. The electric service costs above are an average of what we see customers in the UK pay over 5 years of ownership.

For the first 12 months The Panigale servicing costs around $800, but if there’s two words that will always make a Ducati owner sweat…. regular servicing – especially Desmo servicing. Infamously, the Panigale, and most gas bikes can rack up service bills into the thousands for just one maintenance run. As a previous Ducati owner – I’ve been on the wrong side of a couple of those invoices! Whereas electric bikes, your regular service will never go above $500. Resale value is also another area where electric vs petrol motorcycle costs vary. Electric motorcycles have a high resale value for the same reason we just mentioned, they require little maintenance so there is less that can go wrong over time and they last longer. Also, because demand is so high and supply so low for electric motorcycles, resale values will remain higher.

We expect to continuously update these kinds of articles because the electric vehicle space is really dynamic at the moment. At the writing of this article NSW Government announced a stamp duty exemption and refund scheme for all EVs registered after 1st September 2021, up to the dutiable value of $78,000. That’s up to $5,540 worth of savings right there. You can read more about that announcement here.

What do you think of these price comparisons of electric vs petrol motorcycle costs? Has this comparison given you some insight into EV ownership? We’d love to hear your comments in the section below. Here’s what you need to know about NSW Stamp Duty Reimbursement and Exemption Scheme.   In a move that saw air fist pumps around the Benzina Zero Electric Scooters have arrived at the Australian Electric Motor Co. The Aussie EV manufacturer have sent us our first few models with more Everything You Want To Know About The Energica Experia

Here’s our break down and everything you want to know about the launch of the new Energica Experia. Last week we were pretty thrilled about