Australia is a dirt bike rider’s playground. Endless stretches of mountains, desert and bushland provide the ultimate landscape to push off-road bikes (and their riders) to their absolute limit. So naturally, one of the most popular EV markets in Australia is the electric dirt bikes category.

There are already several incredible electric dirt bike manufacturers that are importing to Australia and in this article we’re going to take a look at some of our favourites – from dirt bikes that are redefining motocross to chook chasers of the 21st century, here’s everything you want to know about electric dirt bikes in Australia This Spanish manufacturer has been redefining what’s possible when state-of-the-art EV engineering and pure dirt bike fun come together. The two models of the Stark VARG separate into a 60HP and 80HP model, with the 80HP model giving you up to 30% more power than the top performing 450CC gas powered dirt bike.

Earlier this year the worlds media had a chance to go to the Stark Future factory to see what all the fuss was about, so check out this video to see what the world’s best dirt bike can do

Sur Ron initially released their off-road only Light Bee electric dirt bike around 7 years ago. It was a hybrid full suspension mountain bike/motorcycle with a powerful mid-drive electric motor. Unlike a lot of dodgy electric motors, bikes and batteries that were coming out of China at the time – the build quality of Sur Ron’s bikes was decent for the price point, which meant they quickly gathered a following in and out of China – USA being their biggest export market. But we’ve also first-hand seen their popularity in the UK. English Electric Motor Co sells these Chinese electric motorcycles and they are their most sold bike – demand actually outstrips supply every year. The reason we have bundled Talaria into this section are rumors that some of the top engineers at Sur Ron weren’t happy with the way product development was going so they broke away and launched Talaria. The bikes look pretty much identical but Talaria have fitted their models with slightly different components which they claim produce better performance and reliability. What we can say about both brands are – they make pretty impressive products for the price range.

The only downside is longevity – we’ve had a lot of owners complaining that they have killed their motor/controller/battery by pushing the bike too hard. There doesn’t seem to be the same limits on performance that premium brands Zero and Energica employ to safeguard the bikes damaging themselves when being pushed hard. When we think of electric dirt bikes you can imagine we’re mostly talking about off road adventuring and MotoX models built for jumps and insane tricks. But New Zealand manufacturer UBCO has created a smart looking utility bike that presents more like a state-of-the-art chook chaser. They kind of remind me of the Benzina Zero Duo scooters. The boxy design is built to attach all kinds of features like extra power supply, cargo decks, baggage racks, etc. and in addition to all wheel drive, these UBCO models are absolute workhorses build to withstand anything.

UBCO offer two models, the 2X2ADV and 2X2WRK, both bikes have basically the same specifications, except the ADV model is road registerable; with additional headlights, indicators, license plate brackets etc. The Cake OR is a pretty awesome all-around bike – light weight, high performance and purpose built for simplicity and off road fun. The OR is the sport model of the Cake range and it comes with some pretty sophisticated Swedish manufacturing. These bikes can only be ridden off road or on private property because they don’t come with the on-road extras making them eligible for road registration. These bikes are fast and have a decent riding range. The super modern design is very simplistic, Cake have only put the necessary elements on this bike to make it a capable off road adventurer. A seat, suspension, foot pegs, throttle, battery, tyres and a drive train – go! Unfortunately you’re only likely to find a KTM Freeride as a second hand bike as they’re no longer available in Australia. I can speak from personal experience however, that these are AWESOME electric dirt bikes. Hopefully they come back to Australia soon, they have an aggressive marketing push overseas, so we suspect it will only be a matter of time before they’re back in the country. 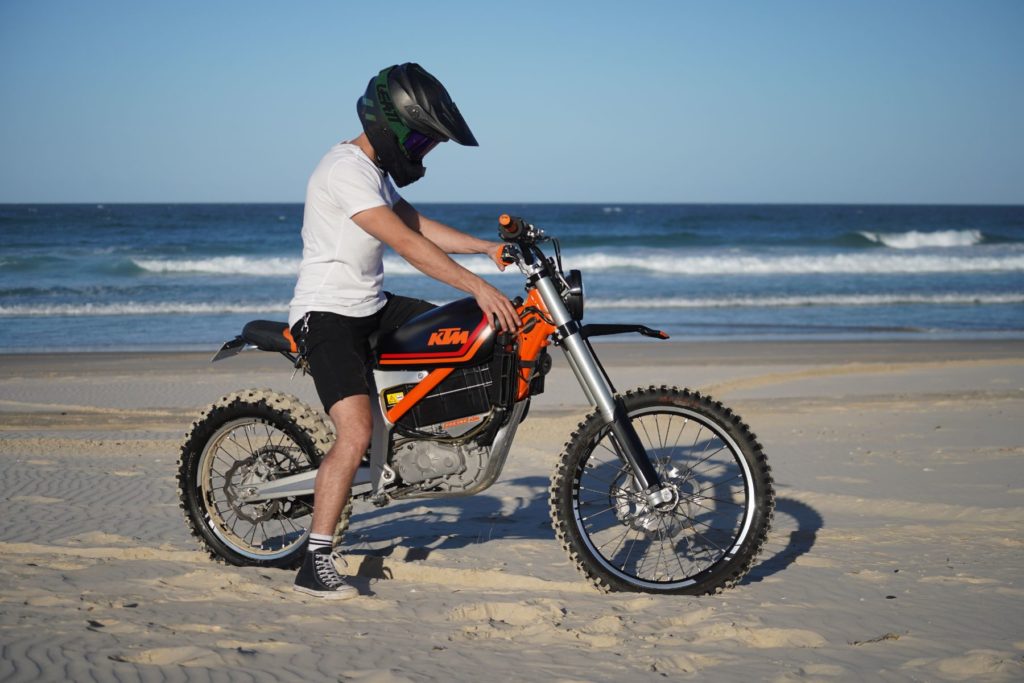 The KTM Freeride has that real old school dirt bike look to them, similar to the Stark VARGS. Except you can’t go past those classic KTM design and engineering that’s built on years of competitive riding. The only electric dirt bikes KTM has available in Australia are for kids, the SXE 3, SXE 5, 12E Drive and 16E Drive. Why do the kids get all the good toys? The French manufacturer technically produces trial motorcycles, however, their Escape and Escape R model provide somewhat of a crossover into dirt bike territory we think are worth mentioning. Mainly because they are very easily accessible to Australian riders. The Escape and Escape R were built with trials sophistication in mind and is an off-road riding master. The 2023 model builds on previous years with TKO maps, regenerative braking, traction control, control over power modes and really sleek lightweight design. Since the electric bike was introduced into trial competitions internationally, they have been topping the podiums again and again. The only Australian manufacturer offering an electric dirt bike, but again, this one isn’t strictly a dirt bike manufacturer. The Stealth Electric Bikes are where the line between mountain biking and motocross get real cloudy, however, they do make some of the most badass bikes out there. The Stealth H-52 ‘Hurricane’ is the light weight, high-power electric dirt bike variant of their B-52 ‘Bomber’ hybrid electric bike. This bike is a purpose built MX machine with all the fight and none of the noise you would expect from a high performance dirt bike. We’re stoked to see an Aussie manufacturer producing some beasty looking bikes, we’re itching to get our hands on one. They have entered the dirt bike game with a pretty impressive compact and lightweight electric dirt bike that looks like it would be a whole lot of fun. Offering two models, the X160 and X260, these medium size electric dirt bikes are meant for fast treks and narrow trails. They also come with an adjustable seat height which kind of suggests it would able to be ridden by both teens and adults. For safety reasons however, the bike has an adult-only age recommendation. 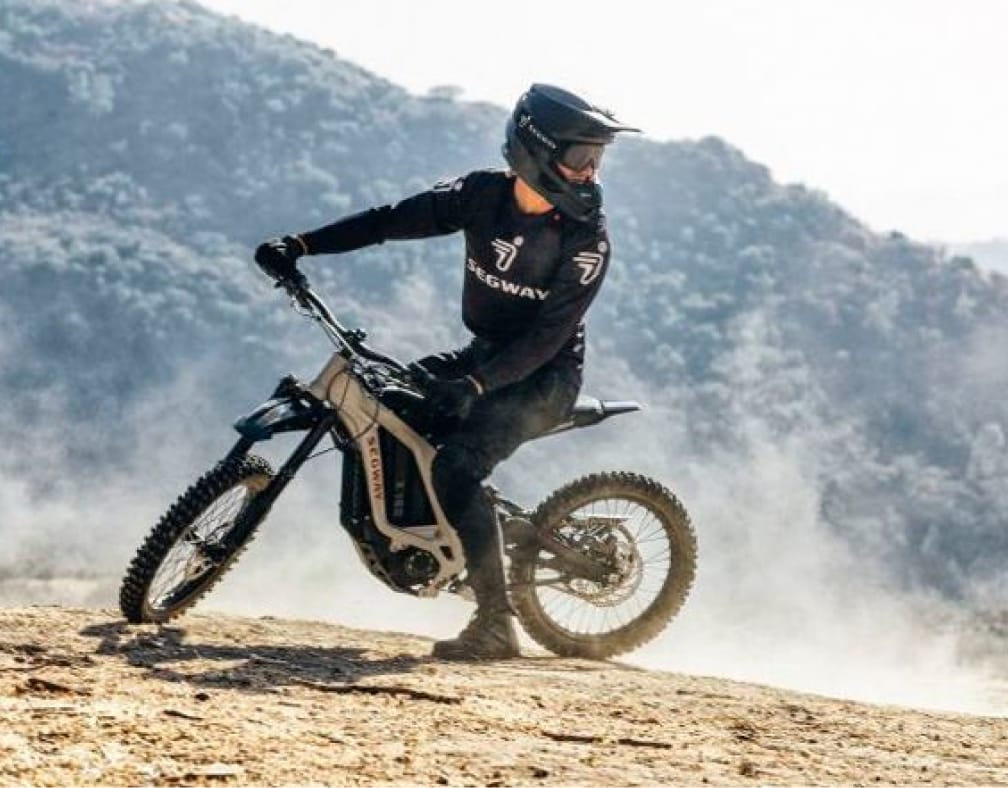 The premium X260 models offers a top speed of 75 km/h, 120km range from a full charge and an impressive 250 Nm of torque, the Segway eBike has become a pretty popular sellar to young Australian riders. And with an agreeable price $6,499 – teenage me is kind of jealous that these kinds of options are available. That wraps up just a few of our favourite electric dirt bikes currently available in Australia. But as we like to do here at AEMC, we like to weigh up the pros and cons of electric bikes vs gas powered bikes. Now when specifically looking at dirt bikes there are a few key points we have to look at.

It’s one of the oldest complaints in the book. We rode dirt bikes as kids, and our parent’s rules were no riding before 10am on weekends and we had to be finished by 5pm. Our neighbours were quick to let us know how annoyed they were at the sound of dirt bikes screaming through the bush every weekend. We had all the space in the world to go nuts, but those two and four cylinder bikes were noisy as hell. Nobody who lives in a rural area wants to have that peace and quiet disturbed by a couple of dirt bikes, and fair enough.

The near silence of an electric dirt bike means you can ride as much as you want without pissing off your neighbors – unless they are within 50 meters of where you are riding. Electric dirt bike engines make a much quieter winding noise which is generated from the motor, the belt/chain and the tyres hitting the dirt. Think of a louder remote control car – perfect for rural living. Plus (and we’re not condoning this) if you’re riding in an area you’re not supposed to be, having an electric dirt bike really helps not getting caught, because they can’t hear you a km away.

Mile for mile, electric dirt bikes are cheaper to service and maintain. There are less parts in electric engines and therefore less to go wrong. There are your typical brake pads and tyres of course, but engine services are few and far between. That being said – the brand you buy and how hard you push it will ultimately decide the longevity of your bike. Some of the Chinese bikes are cheaper to buy upfront – but with limited support and more examples of major errors – they may not be the better value bikes longer term.

While the costs to service might be lower for gas powered bikes. At the moment you are for more likely to find a small engine bike mechanic than you are to find one that’s certified to work on electric motorbikes. This is a problem that will solve itself in time as adoption of EV technology becomes the new normal.

With the cost of fuel as it is, it’s nice to be able to just plug in your bike to a power socket – no more trips to the fuel pump. It’s incredible how low the cost of powering an electric dirt bike is compared to a gas powered bike. Electric dirt bikes will typically have a battery capacity between 2 – 7 kWh. Even with the rise in electricity prices – that means a full charge is going to cost you between $1.20 to $4.20. That’s a damn site cheaper than 6.5 litres of petrol ($14 at today’s current rate). However, the one thing we will admit defeat on is recharging dirt bikes on trips. If you’re out on a camping trip with your mates for a weekend and your battery is empty, it’s not as simple as refuelling from a Jerry-can. You would either have to have access to power at the camping site, a petrol powered generator (which sort of defeats the purpose in our opinion), a solar powered generator, or a pre-charged battery option to charge from. All somewhat limited options at the moment but something that will no doubt become more abundant as we’re forced to move from petrol vehicles.

Did we cover your favourite electric dirt bike in this article? We’re keen to hear more about your experiences and favourite brands. 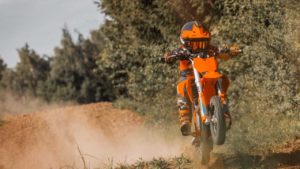 Better technology, more control and advanced safety features, these are the best electric dirt bikes for kids.    I grew up in rural South East